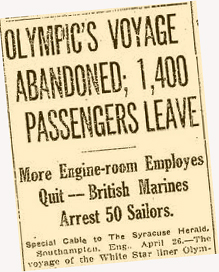 The word “mutiny” brings to mind images of HMS Bounty, Capt. Bligh, and conflict on the high seas. The Olympic Mutiny, however, took place in the 20th century and while the liner was in port.

The “mutineers” (actually strikers) were protesting the hurried installation of 40 allegedly aged and corroded collapsible lifeboats on the White Star liner Olympic. The lifeboats, reportedly taken from naval vessels moored nearby in Southampton, were hastily added to Olympic in the wake of the previous month’s Titanic disaster.

On 24 April 1912, the day the strike began, P. E. Curry, White Star’s Southampton manager, warned Olympic’s crew that refusal to obey orders was “rank mutiny” and that “Capt. Haddock, if he pleased, could order the police to place every deserting fireman (back) aboard the ship.” Curry then promised that wooden lifeboats would replace all of the collapsible boats. According to a New York Times report, “The men were not satisfied and the entire staff of firemen, greasers, and trimmers, with but three exceptions, ceased work, collected their kits, and left the ship, singing, ‘We’re All Going the Same Way Home.'”