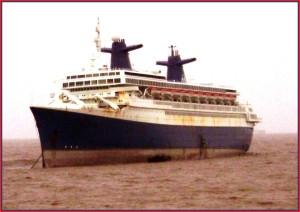 The party was great while it lasted, but as the 21st century dawned the former ocean liner began looking an aging relic, superseded by a new generation of purpose-built mega cruise ships. A boiler room explosion in May 2003, which killed eight crew members and seriously injured 17 others, sealed Norway’s fate. She never again sailed under her own power.

Norway was sold in 2006 to a Liberian firm for scrapping. Renamed Blue Lady, she suffered a slow and painful death. The former sleek superliner was rejected by breakers in several ports at the instigation of environmental protesters who warned that the vessel contained hazardous materials. Blue Lady was eventually broken up in Alang, India, in 2008. Another great ocean liner was lost forever.