Aleksandr Pushkin was a Soviet ocean liner. It actually had a First Class. Really.

Aleksandr Pushkin was launched on 26 April 1964 at the VEB Mathias-Thesen Werft shipyard in Wismar, East Germany. At launch, the 19,680 GRT liner was 578 feet long and 77 feet at beam. 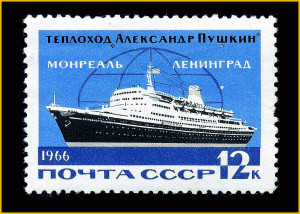 The second of five “poet-class” ships, Aleksandr Pushkin served a Copenhagen-London-Montreal route for the Soviet-owned Baltic Shipping Co. until 1970 when she was switched cruising. Her less-than-modern amenities included cabins for up to six people and three taps in the bathrooms (hot, cold, and sea water).

In 1985 after a major modernization and refurbishment in Japan, Aleksandr Pushkin was transferred to the Far Eastern Shipping Co (also Soviet owned). After the collapse of the Soviet Empire, Aleksandr Pushkin was sold to Britain’s Shipping and General Services. After another major overhaul in 1993, she joined Orient Lines as Marco Polo. She served with Orient Lines (acquired by Norwegian Cruise Lines in 2002) until June 2007 when she was sold to Transocean Tours.