In an eerie foreshadowing of Normandie’s fate just three years later, Paris (1921) caught fire and capsized in her Le Havre berth on 18 April 1939 (see the newsreel above). The wreck remained until in place until well after the conclusion of World War II. 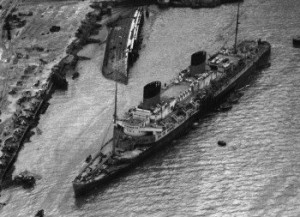 Partially-submerged Liberté, near the Paris wreck.

Paris in the 1920s was, like her namesake, fast, upbeat, bold, young and forward looking. Touches of Art Deco could be found all around the liner, although not to the same extent as on many later superliners, such as Normandie or even Queen Mary. Paris’ cuisine was, of course, exemplary (not stodgy, as on many British ships of the time). Her wine list was deep (not absent, as on American liners).

In 1945, Compagnie Générale Transatlantique (French Line) was awarded the Norddeutsche Lloyd liner Europa (1929) as compensation for the loss of Normandie.  As the former Blue Riband-winning liner, renamed Liberté, was being refitted in Le Havre in December 1946, a gale tore the ship from her moorings and threw her into the half-submerged Paris wreck.

Liberté, fortunately, settled in an upright position. Six months later she was refloated and by spring 1947 she was in St. Nazaire for her final rebuilding.