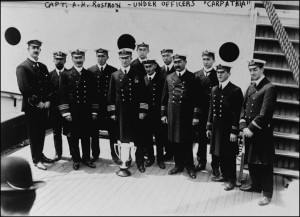 Capt. Rostron and his officers

Carpathia’s perilous journey to reach the stricken Titanic is perhaps the most stirring tale in ocean liner history.

On 15 April, at 04:00, Cunard Line’s Carpathia, traveling at great risk to herself though a perilous ice field, arrived at the Titanic disaster site.

Upon receiving the first wireless distress call from Titanic, Capt. Arthur Rostron immediately changed Carpathia’s course to the stricken vessel’s location. He raced his sturdy little liner at a breakneck 17 knots—three knots beyond her rated maximum speed—through the same ice field that had devastated Titanic in a harrowing three-and-a-half hour charge to reach the sinking liner. Upon arrival, Carpathia’s officers, crew and passengers beheld a heartbreaking and almost unbelievable sight. The world’s largest, newest and most celebrated ocean liner was gone, virtually without a trace.

“Devoutly thankful I was that the long race was over … but with that feeling was the veritable ache which the now certain knowledge of the liner’s loss brought. No sign of her—and below was the first boat containing survivors.” —Arthur Rostron, “Home From The Sea,” 1931.