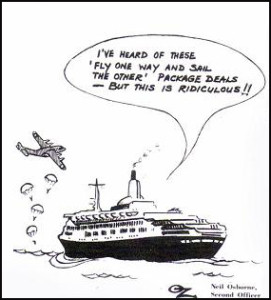 On 17 May 1972, while traveling from New York to Southampton, Queen Elizabeth 2 was the subject of a telephone bomb threat and a ransom demand of USD 350,000.

British bomb disposal experts were parachuted into the mid-Atlantic to find and disarm the six bombs the caller claimed he had planted on the liner. No bombs were found; the call was a hoax.

“The ship was searched from end to end, and only one suspicious trunk was found. That was blown open by the experts, which was found to contain only dirty washing, and that was that,” recalled Capt. Robin Woodall.

The incident inspired one of the truly cheesy ocean liner movies of all time: 1974’s “Juggernaut.” Omar Sharif starred as the liner’s captain, Richard Harris played the bomb-disposal expert and Hamburg (ex-Maxim Gorkiy) substituted for QE2. Anthony Hopkins is in it, too.

The film was released in the US as “Terror on the Britannic.”