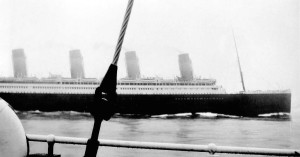 Olympic races by an ice-encrusted Nantucket Lightship (LV-117) in early April 1934, approximately one month before the fatal collision. (Click to enlarge)

Seven out of 11 crewmen on board the lightship were killed. A later examination showed that the White Star liner was homing-in on LV-117’s radio beacon a bit too accurately, leading to a direct collision with the unlucky lightship.

The incident occurred just five days after White Star Line was merged into Cunard Line to create Cunard-White Star Line. In less than a year, an aging Olympic—Titanic’s sister ship—would be permanently removed from service.

Just a few weeks earlier, in January 1934, LV-117 received a glancing blow from United States Lines’ Washington, resulting in no casualties and only minor damage to both vessels.