When United States took the Hales Trophy home in late 1952, the award for the fastest ship to cross the Atlantic was displayed inside a glass enclosure at the United States Lines headquarters, located at 1 Broadway, New York.  It remained there even after United States was taken out of service in 1969. Ten years later, the trophy was transferred to the U.S. Merchant Marine Academy’s museum. 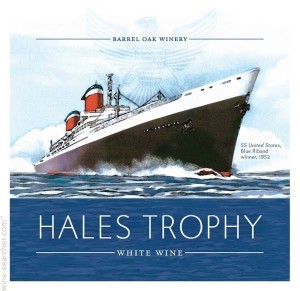 The brief video above shows Commodore Harry Manning, the Big U’s captain on her record breaking voyage, accepting the trophy from its custodian, the Duke of Sutherland.

The Hales Trophy is currently located in the shipyard offices of a catamaran company in Hobart, Australia. While the Blue Riband honor for the fastest Atlantic crossing can only be held by an ocean liner,  any ship—even one without passengers—can win the Hales Trophy, despite what the newsreel announcer says.

It doesn’t seem fair. The trophy really belongs onboard a restored “Big U.”