Raffaello was la dolce vita on the high seas, a grand, glorious and excessive last party followed by sadness and disillusionment. 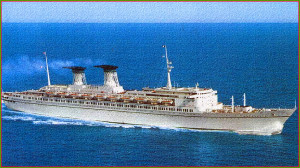 The last great Italian ocean liner, Raffaello, was launched on 24 March 1963 at the Cantieri Riuniti dell’Adriatico shipyard in Trieste, Italy.