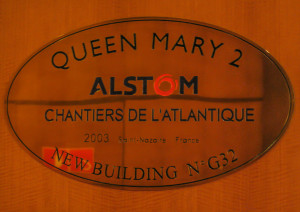 In Mexico, a girl who is having her 15th birthday is called a quinceañera.

By being the only ocean liner maintaining a scheduled transatlantic service, Queen Mary 2 keeps the flame alive.

Queen Mary 2 was launched at the Chantiers de l’Atlantique shipyard in Saint-Nazaire, France. She continues to hold the record for the largest ocean liner ever built, although there are now other larger passenger ships constructed as cruise-only vessels. The Cunard Line flagship is, sadly, the only ocean liner currently running any form of scheduled point-to-point service (unlike a cruise ship that usually returns passengers back to their port of embarkation). Building on a tradition extending back over 175 years, Queen Mary 2 provides a civilized alternative to fast yet increasingly crowded, stressful and unhealthy airline travel. 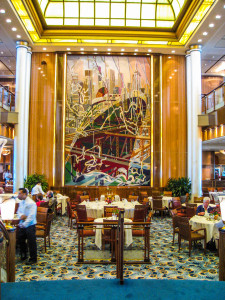 The 148,528 GRT “QM2” is 1,132 feet long with a 147.5-foot beam. The superliner has  a rated maximum speed of 30 knots (far faster than typical modern cruise ships of her size), although she is rarely called upon to achieve such a pace. Queen Mary 2 is powered by four 21.5 MW Rolls-Royce/Alstom “Mermaid” electric propulsion pods: two fixed and two azimuthing. While Queen Mary 2 could easily operate as an express liner, there is virtually no market demand for such a service these days.

Trivia: Queen Mary 2 will never capture the Blue Riband from United States, since the latter accomplished the feat at an average speed of 34.51 knots.

Queen Mary 2 ’s facilities include 15 restaurants and bars, five swimming pools, a casino, a ballroom, a theatre and even a planetarium. There are also onboard kennels and a nursery. She is capable of carrying 2,620 passengers and 1,253 officers and crewmembers. Queen Mary 2 is arguably the most spectacular ocean liner ever built; an icon of 21st century ocean travel.

Anyone who loves ocean liners should try to make at least one transatlantic crossing on Queen Mary 2. It is not like a cruise. It is an unforgettable experience.