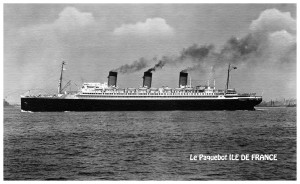 The 43,153 GRT-ship was 763 feet long with a 92 foot beam. The quadruple-screw vessel was rated at 24 knots. Ile de France featured two masts and three funnels (although she lost one, a “dummy,” after the war).

Ile de France was always a very popular ship that had little trouble elegantly transitioning from the Jazz Age to the Rock and Roll era. During World War II she served as a troopship operated by both P. & O. Line and Cunard-White Star Line. She was returned to a liberated French Line in 1947 and resumed transatlantic service in 1949 after undergoing a major refurbishment.