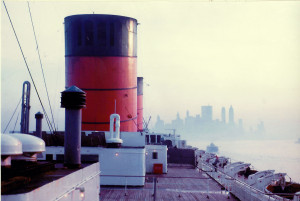 Queen Elizabeth’s second maiden voyage, the one made with civilian passengers and under Cunard Line livery, occurred in October 1946 after the liner had completed her military responsibilities and received a complete refurbishment.

Unlike her first maiden voyage, which was a secret journey, Queen Elizabeth’s initial civilian crossing was anything but a hush-hush affair. In fact, as this newsreel amply shows, it was hard to get people to stop talking about the ship and various other topics.

Keep an eye out for the ever-amiable Commodore Sir James Bisset, Queen Elizabeth’s captain. Imagine sitting at his table, surrounded by the rich and famous.

The narrator calls Queen Elizabeth (1940) “the world’s most beautiful ship.” She certainly was a beauty, and a magnificent sight in 1946 after so many years of war and deprivation.

Mentioned, but  barely seen, is a far less congenial individual, Soviet Foreign Affairs Minister Vyacheslav Mikhailovich Molotov. (What do you think he drank at the captain’s table?)

In any event, Bisset invited Molotov to take a turn at the helm. The newspaper clipping below provides more details.