The maiden voyage of the first White Star liner was anything but routine. 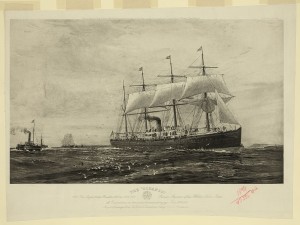 On 2 March 1871 Oceanic—White Star Line’s first ocean liner—departed Liverpool on her maiden voyage to New York. At least that was the plan.

Only hours after departing Liverpool, carrying a mere 64 paying passengers, Oceanic was forced to return to Liverpool due to overheating engine bearings. After repairs were completed, Oceanic began her second maiden voyage (if there can be such a thing) on 16 March. This passage terminated successfully in New York.

Despite her inauspicious start, Oceanic would become a popular and, in many respects, revolutionary liner. Upstart White Star challenged Cunard Line’s North Atlantic dominance with a vessel that offered larger portholes, running water in most cabins, a dining room that could accommodate all first class passengers in a single seating and first class staterooms located amidships to minimize both rocking and engine noise.