Britannia (1840), the first steamship of the British and North American Royal Steam Packet Co. (Cunard Line), was launched on 5 February 1840. 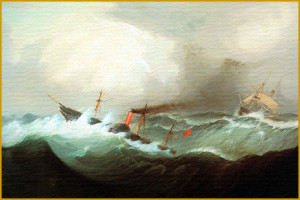 The new state-of-the art wooden paddlewheel liner, built on the Clyde by Robert Duncan & Co., was 207 feet long and 34 feet at beam. Featuring three masts and a single funnel, the 1,139-ton Britannia was capable of carrying 115 passengers and a crew of 82 at a top speed of approximately 9 knots. Britannia was launched by Isabella Napier, wife of Robert Napier, the liner’s engine builder. Britannia’s port of registry was Glasgow.

In January 1842 Charles Dickens traveled to the US on Britannia. He was seasick for most of the voyage. Like many a modern cruise ship passenger, Dickens was dismayed by his stateroom’s compact size. “I do verily believe that … nothing smaller for sleeping in was ever made except coffins,” he wrote later.

Britannia was sold in 1849 to the North German Federation, renamed Barbarossa, and converted into a warship. Britannia’s final fate remains murky, beyond the fact that she apparently survived as an engineless hulk for many years. Some reports indicate that the vessel was sunk as a target ship in 1880.