By the 1970s, with her time as an ocean nearing the end, Canberra escaped the breakers by forging a second life. She successfully transitioned into a new role as a cruise ship, becoming a popular and much beloved vessel affectionately known as “The Great White Whale.” A mid-1970s refitting completed Canberra’s shift to cruising. 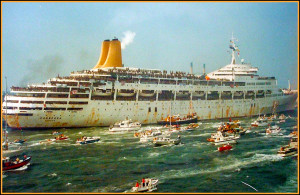 Canberra’s troops and crew receive a jublilant welcome as they return home from war service.

Canberra’s proudest moment came in 1982 when she was called into service as a troop and landing ship during the Falkland War. Canberra provided prolonged service at the conflict’s heart (companion troopship Queen Elizabeth 2 was deemed to valuable to expose to direct danger and was kept far away from the main war zone).

Canberra escaped the war with only minor damage; her white hull reportedly led Argentinean forces to mistake her for a hospital ship.

After the war,  Canberra returned to cruising, her popularity boosted by her Falklands service. But by the mid-1990s advancing age, rising fuel costs and a new generation of mega-cruise ships led to her retirement. She was removed from service and scrapped in Pakistan in 1997. She is still missed by thousands of former passengers and crewmembers.