Empress of Canada (1961), Canadian Pacific Line’s last liner, was launched on 10 May 1960 at the Vickers-Armstrongs shipyard in Walker-on-Tyne, England. Measuring 650 feet long and 86.5 feet at beam, the 27,300 GRT Empress of Canada is a notable vessel in that she heralded the end of one major passenger shipping line and the birth of another. 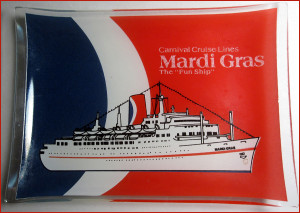 Just as airlines were beginning to bite deeply into transatlantic passenger traffic, Empress of Canada was sent into service between England and Canada. Soon, however, the liner was spending more time cruising the Caribbean than crossing the North Atlantic. In 1972, the last liner ever built for Canadian Pacific was sold to a new cruise-oriented line called Carnival. Renamed Mardi Gras, the little ship became the foundation of an empire that would eventually absorb other historic shipping companies, including Cunard Line and Holland America Line.