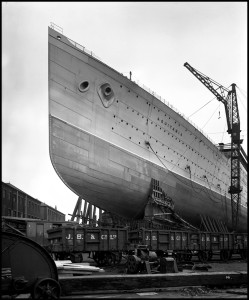 A pre-launch view of Aquitania’s bow.

Launched on 21 April 1913 at the John Brown & Co. shipyard, Aquitania was destined to become one of the longest-lived and most beloved liners in Cunard Line history.

Aquitania departed Liverpool on her maiden voyage to New York on 30 May 1914, the day after Empress of Ireland tragedy. It must have been a subdued departure in light of the fact that Empress of Ireland’s destination was Liverpool.

Aquitania made just two more voyages to New York before the outbreak of World War I and her requisition by the British government.