While still under Cunard Line management, Queen Mary was both excellently maintained and received periodic upgrades designed to take advantage of the latest safety and passenger comfort technologies. 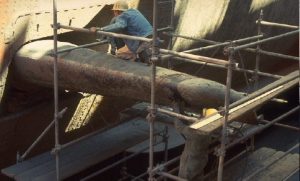 A stabilizer fin being removed during the liner’s final drydock visit.

Based on a technology developed by Sir William Denny, the mechanical stabilizers could be extended from the ship whenever needed. The fins were designed to be turned against the motion of the liner, automatically dampening heavy rolling (a characteristic shared by most liners of the era).

The silent film above shows the stabilizers being installed during a 1957-58 refit, followed by a series of sea trials. Notice how well maintained the great liner looks

The stabilizers were removed shortly before Queen Mary was handed over to her new owner. (Just as well, since they probably would have rusted and fallen off by now anyway.)