Queen Mary, arguably the greatest ocean liner ever built, was launched On 26 September 1934, at the John Brown and Co. shipyard in Clydebank, Scotland.

For a world still tightly gripped in a deep and seemingly endless economic depression, Queen Mary’s launch provided a glimmer of hope that better days were ahead. 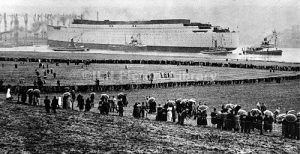 For the record: Queen Mary is 1,019 feet long and 118 feet at beam. She could carry up to 2,139 passengers and 1,101 crew. Her service speed was an impressive 28.5 knots, although she could exceed 32 knots when necessary (such as when outrunning U-boats during war service).

Queen Mary was, and in many respects still is, utterly awesome. While other liners were more glamourous (think Normandie) and faster (think United States), Queen Mary in her prime combined glamour, speed, size, service, comfort, dependability, safety and many more desirable attributes.  She was, as they say, the entire package.

If you ever have the chance, drive along Queens Highway in Long Beach, California, preferably in a convertible (you will be, after all, only 30 miles from Hollywood). As you make your way down the sunny boulevard, look to your left—toward the Pacific Ocean—and admire Queen Mary sitting regally in retirement. You’re going to feel a lump in your throat, even if you’ve been looking at ships your whole life. Guaranteed.