On 30 August 1939, Queen Mary departed from Southampton on her last voyage before the outbreak of World War II. It would be a memorable crossing, to say the least 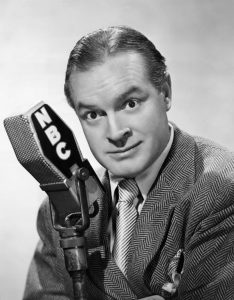 Bob Hope. Thanks for the memorable crossing.

The war caught up with Queen Mary before she could reach New York. On the day after her departure, Germany invaded Poland and Queen Mary was immediately ordered to black out her lights and run a zigzag course. Queen Mary’s passengers, including British-American actor-comedian Bob Hope, were greatly relieved when the Cunard liner arrived safely arrived in New York.

Queen Mary would remain berthed in New York until the end of the year while Admiralty officials decided what role she would play in the war. Soon, Queen Mary would be converted into a troopship, serving alongside her Queen Elizabeth, her future fleetmate.

“Built for the arts of peace and to link the old world with the new, the Queens challenged the fury of Hitlerism in the battle of the Atlantic,” Winston Churchill would write after the war’s conclusion. “Without their aid, the day of final victory must unquestionably have been postponed.”

Adolf Hitler had offered $250,000 and the Iron Cross to any U-boat Captain who could sink Queen Mary. The prize was never claimed, thankfully. The beloved Queen Mary currently basks in the warm Southern California sun. One can hope that Hitler is basking in an even warmer location.