Few noticed when White Star Line’s Naronic (1892) was launched on 26 May 1892 at the Harland and Wolff shipyard in Belfast. But less than a year later, Naronic made headlines worldwide as “the ship that disappeared.” 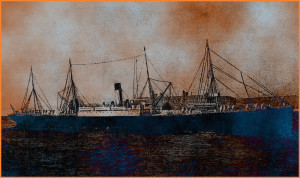 Primarily a freighter, with only limited passenger accommodations, Naronic left Liverpool bound for New York on 11 February 1893 under the command of Capt. William Roberts. On board was a crew of 50, plus 24 cattlemen tending to the ship’s livestock cargo. Once Naronic left the Mersey, she was never seen again.

Several bottles with notes mentioning the sinking appeared over the next few months, two in the US, one in the Irish Channel and another in the Mersey.