Amid rain and a bomb threat, Queen Elizabeth 2’s maiden voyage, Southampton to New York, began on 2 May 1969.

As the sleek, ultra-modern superliner gracefully sailed down the Solent that spring day, more than a few passengers, crew, and observers must have felt they were participating in history’s final ocean liner maiden voyage. They had every reason to think so. Passenger levels sat at record lows and liners were fleeing the North Atlantic faster than a speeding Concorde (which made its first flight exactly two months earlier). 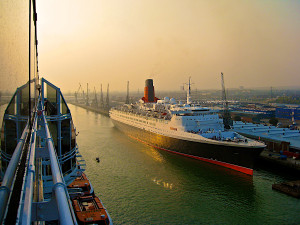 Sunset. QE2 moored in  Southampton near the end of her Cunard days, May 2008. Photographed by the author from Queen Mary 2.

“A floating anachronism” was a term often employed to describe QE2 in her early years. And, in many ways, she most certainly was. Yet QE2’s critics underestimated the appeal of ocean travel, particularly in an age when airlines seemed to be engaged in a race to the bottom in terms of seating, meals, and other customer amenities.

By the time the aging veteran (of both peace and war service) left the Cunard Line fleet in 2008 (which by then included an even larger and more luxurious ocean liner), people often used words like “beloved” and “treasured” to describe the magnificent Queen Elizabeth 2.

Since retirement, QE2 has sat patiently in Dubai waiting for her “forever home.”