There’s a report out of Dubai today that Queen Elizabeth 2 has been declared a “dead ship” and will soon be moved to an unnamed location somewhere in Asia. 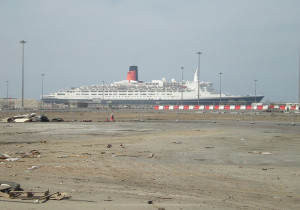 Big News Network.com, citing an unnamed official at Dubai Drydocks World, claims that the former Cunard Line flagship is “officially dead,” along with all plans for her restoration. The news report also descrbies QE2 as  “a floating wreck.”

The story does not mention plans proposed by several government and business leaders in Scotland to move QE2 to a permanent home on the River Clyde, where she was built nearly a half-century ago.

The report does not speculate on QE2’s eventual fate upon arriving in Asia, but with no plans announced the implication is that the liner is headed to the breakers.