On 18 June 2007, Cunard announced that its former flagship, Queen Elizabeth 2, would be sold to Istithmar World, a Dubai company, to serve as a floating hotel. At least that was the plan at the time. 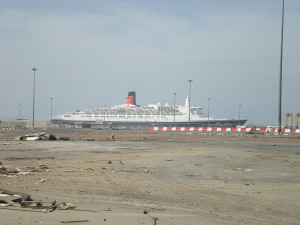 In Dubai, the legendary QE2 awaits her fate.

Although the historic superliner was indeed sold after retiring from active Cunard service on 27 November 2008, that year’s global recession and the new owner’s sudden financial difficulties killed the hotel project.

In 2013 Dubai Drydocks World announced that QE2 would to be sent to an undisclosed location in Asia for conversion into a five-star floating hotel by 2015. The plan, if there ever was one, was never completed.

In June 2015, after press reports circulated that QE2 was “rotting away,” 36 members of the UK parliament signed a motion calling for the idled liner to be returned to Scotland from her Dubai berth.

At the present time QE2 remains berthed in in Dubai, her future uncertain.