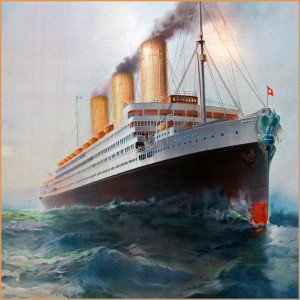 Imperator was the last liner to bear a figurehead. It fell off long before Cunard took ownership of the vessel.

It’s 1919, and Cunard Line accepts the delivery of its “giant hun ship,” as the newsreel title card less than tactfully describes the former HAPAG liner Imperator.

Cunard was awarded the ship as partial reparation for the many vessels the company lost to German U-boats during the then-recently concluded war. Cunard would rename the liner Berengaria, after Queen Berengaria, wife of Richard I . The ship would remain in the Cunard fleet until 1938, initially as the line’s flagship, later as a low-tier cruise ship (referred to, by some, as “The Bargain-area”).