Either United States or Queen Elizabeth 2 could be headed to Manhattan’s Pier 57 sometime in the near future.

According to a report in The Real Deal, a New York real estate publication, RXR Realty and Youngwoo & Associates are pondering the idea of redeveloping the pier with a retired ocean liner docked alongside as a hotel. The two companies formed a joint venture last year and are looking into bringing in a ship with the intention of creating a hotel facility at Pier 57, the publication says.

“We’re looking at bring [sic]a ship, one of the large retired ocean liners to potentially create a hotel facility next to it,” Michael Maturo, president of RXR, said during a business roundtable discussion on Friday morning, according to the The Real Deal story. 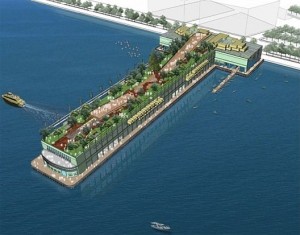 Youngwoo & Associates was selected in 2009 to redevelop the site.

United States currently sits in Philadelphia. Late last year, the SS United States Conservancy, which oversees the idled vessel, announced that it had reached a preliminary agreement with an undisclosed party “in support of the redevelopment” of the historic superliner. Rumors have circulated that the liner would eventually be moved to either Manhattan or Brooklyn.

Queen Elizabeth 2 has sat idle in Dubai  since being retired by Cunard Line in 2008. In early 2013, reports circulated that the liner would soon head to an undisclosed destination in Asia to serve as a floating luxury hotel, shopping mall and museum. It now appears that that plan, if it ever truly existed, has fallen through.