Not too far distant from Spain’s Mediterranean shoreline lies the wreck of a once proud ocean liner. Was Monte Rosa cursed by fate? It seemed the ship’s damnation was to dog the graceful liner’s every nautical league during her final voyage.

The former cruise ship set sail from Yokohama in February 1954. As it cleared the Japanese mainland its 1,276 passengers and largely British and Commonwealth crew had every reason to look forward to a pleasant voyage. Their forthcoming ocean odyssey would be crowned by a homecoming to an England many had not seen for years. 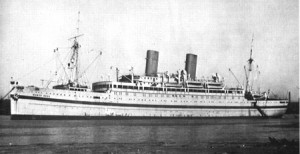 Was Monte Rosa a cursed ship?

Passengers included military families of servicemen based in the Far East, many of whom were survivors of the Korean War. Among these wounded were veterans of the Battle of the Hook. Many of those homeward bound for Blighty were stretcher carried up the ship’s gangways. The ‘Dukes’ from the Duke of Wellington’s Regiment, outnumbered in battle by five to one, had taken honours but had taken many casualties too.

Sailing west the Monte Rosa’s passengers and crew were to endure the voyage from hell. The fine-lined ocean liner seemed reluctant to return to Europe. Its onwards voyage was dogged by defects in the super liner’s propulsion system which needed constant running repairs. The luckless liner appeared to spend more time wallowing helplessly in the Indian Ocean than actually sailing.

Drearily, the three weeks anticipated passage to Port Said in Egypt took an excruciating eight weeks to accomplish. It must have brought great relief to all on board when Monte Rosa finally limped into Egypt’s Port Said. From here on only the Mediterranean and Bay of Biscay lay between them and England.

The liner had known far happier days. A former German cruise ship, it had once cruised the sun drenched Mediterranean seas, the Aegean, Ionian, and Adriatic. However, things had been far different for that was before the outbreak of the 1939 – 1945 World War.

From 1930 to 1945, the 13,882-ton twin-funneled liner had been one of Germany’s fleet of superliners. Built by Hamburg shipbuilders Bohm and Voss, Monte Rosa was one of five fabulous sister-ships. Under Nazi Germany’s Kraft Durche Freude (Strength through Joy) leisure scheme Monte Rosa was destined to provide German workers and their families opportunity to take cruises of a kind that had previously been the preserve of the elite. Later, after war broke out in Europe the liner was used in various theaters of maritime war. 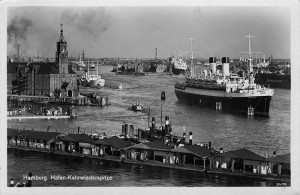 Allocated for military purposes in 1940, Monte Rosa was a floating barracks now moored at the then German port of Stettin. Later, used for carrying troops to German occupied Norway it was attached to the battleship Tirpitz. From its lair in the Norwegian fjords, the mighty warship harried the Allied convoys carrying arms and equipment to Soviet Russia upon which the Red Army depended. Later, after Germany’s defeat in 1945 the liner, along with much of Germany’s merchant marine, was seized by the Allies as a prize of war.

In the spring of 1954, the ill-fated liner embarked on the last leg of its voyage. Sailing westwards from the Egyptian port of Alexandria it cast off its bowlines and set sail towards Gibraltar. Days later, when sailing off Algiers, an engine room fire resulted in a cataclysmic explosion. Four crew members were killed in the explosion and the ship was finally disabled. The rescue of the remaining 1,276 passengers and crew was successful. However, the liner’s hulk, whilst being towed westwards towards Gibraltar, foundered and sank beneath the waves.

Monte Rosa had eventually reached the end of her sometime illustrious career. Renamed by its new British owners, Empire Windrush, the liner was to pioneer the flood of West Indian immigration to Britain. Other liners such as the Pacific Steam Navigation Company’s (PSNC) Reina del Mar and White Star liner Georgic were soon to bolster the massive Caribbean exodus to feed postwar Britain’s need for labor.