A handsome little liner (17,041 GRT, 556.4 feet), Rhodesia Castle was built at Harland & Wolff. Like all Union-Castle vessels, she featured a red funnel top in black and a striking lavender hull.

The liner sailed on the “round Africa” run, a routine and valuable service during the days of the British Empire. She continued on this route until August 1960 when she was withdrawn from service for a major refit, including the installation of air conditioning. Thereafter, Rhodesia Castle ran a London-Durban-London route, except for an occasional round Africa voyage. In September 1967, with the empire fading away and air transport stealing away passengers, Rhodesia Castle was sold to Taiwanese breakers, arriving in Kaohsiung on 29 October 1967. Her service life was a mere 16 years. 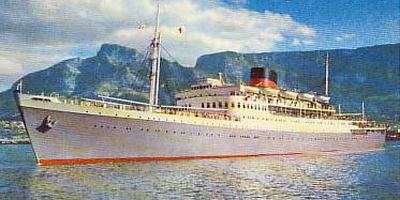 Rhodesia Castle, lavender hull and all.

Incidentally, there never was a castle named Rhodesia. Union-Castle Line liked to give its ships names that ended in “castle.” Some of these vessels were named after real castles (such as Carnarvon Castle and Dunvegan Castle) while others bore fictional castle names (like Kenya Castle and Rhodesia Castle). Rhodesia was the colonial name of the country that is now known as Zimbabwe.