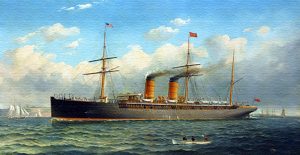 On 9 May 1903, New York police received a letter claiming that a bomb had been placed onboard Cunard Line’s Umbria, which was scheduled to depart that day.

The Umbria bomb plot presents on interesting sidelight on ocean liner history and a reminder that terrorists of one sort or another have always been among us.

It was no mere threat, however. There really was a bomb lurking inside the liner.