On the evening of 14 April 1912 White Star Line’s Titanic, on her maiden voyage from Southampton to New York, struck an iceberg located about 370 miles (600 km) south-southeast of Newfoundland. The largest ocean liner of her time sank the following morning. Over 1,500 passengers and crew, representing a cross-section of Edwardian life, perished in the disaster.

The year 1912 was eventful, as most years are. There was a war in the Balkans. New Mexico and Arizona became, respectively, the 47th and 48th US states. The US invaded Nicaragua. Japan’s Emperor Meiji died. The first Tarzan story was published. Woodrow Wilson was elected US president. Yet all of these events are overshadowed by the year’s top news story, the Titanic disaster. 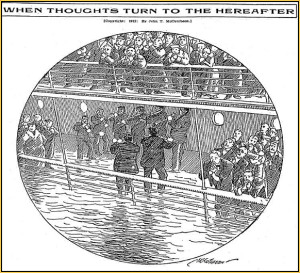 A highly imaginative cartoon that appeared in a Chicago newspaper the day after Titanic sank. (Click to Enlarge)