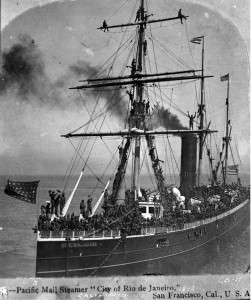 An undated newspaper photo of City of Rio de Janeiro.

The Titanic of the Golden Gate
On 22 February 1901 the Pacific Mail steamer City of Rio de Janeiro (1878), inbound from Hong Kong, was nearing the end of her journey, feeling her way toward San Francisco in a dense morning coastal fog.

Just before 5 a.m., the liner neared the Golden Gate, the entrance to San Francisco harbor. Unfortunately, the ship was south of her course, which resulted in her running into a line of sharp rocks near Land’s End and Fort Point. Nearly the entire underside of the vessel was ripped open. Lacking watertight bulkheads, the liner flooded quickly and sank in less than 10 minutes.

In those few minutes, 200 passengers rushed up on deck and began fighting for lifeboat seats. The ship was packed with mostly Chinese and Japanese emigrants. The U.S. Consul-General in Hong Kong, who was returning to the United States on leave with his wife and two children, was also on board. The liner’s precious few lifeboats were quickly overcrowded and most foundered. Vicious fistfights broke out over scarce life jackets.