Have you ever wondered where your favorite liner docked in New York in 1964? Well, you’ll find the answer here. Cunard Line, United States Lines, Italian Line, French Line, Holland America Line and all the rest. The map freezes a moment in time just before the great falloff in transatlantic ocean liner traffic.

Below are three map views. The first view shows the “newer” northern piers, which were built beginning in the 1930s to accommodate the era’s larger liners and where most liners and cruise ships continued to dock until the late 20th century. The second map view shows lower Manhattan’s historic 19th and early 20th century piers. Pier 59, for instance, is where Titanic was scheduled to dock. Pier 54 was Lusitania’s final port call. The third map view shows the entire line of North River piers, as well as many piers on the East River as well as on the shores of Brooklyn and New Jersey. 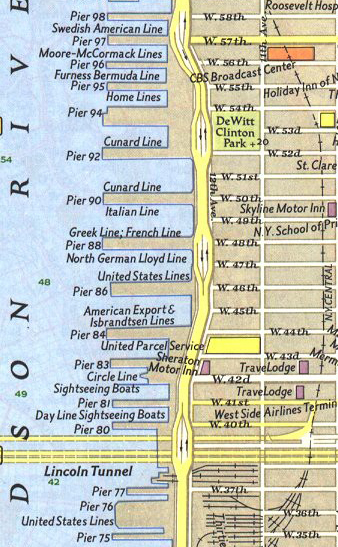