Canadian Pacific Line’s Empress of Ireland was launched on 27 January 1906 at Glasgow’s Fairfield Shipbuilding and Engineering.

The 14,191-ton Empress of Ireland was 548 feet long with a beam of 65 feet. The twin-screw liner featured two masts and a pair of funnels. She had a rated service speed of 19 knots and offered accommodations for 310 first-class, 470 second-class and 770 third-class passengers. 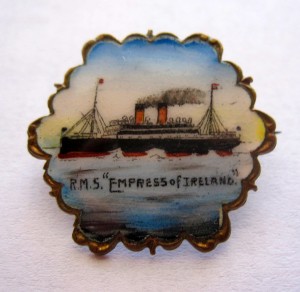 An Empress of Ireland brooch in the Oceanliners Magazine Collection.

A New Player Emerges
Empress of Ireland and her sister ship, Empress of Britain (1906), were important vessels and, for a country long overshadowed by the US and UK, the pride of Canada. The liners marked Canadian Pacific’s emergence from a company best known for its transcontinental railway and coastal steamers into a major player on the North Atlantic.

The new ships were the first passenger liners to be built specifically for Canadian Pacific Line’s growing emigrant trade from Liverpool to Canada. The Empresses provided weekly service from Liverpool, starting in May and June 1906. Large, fast and comfortable, they soon became very popular and keen rivals to Cunard and White Star liners serving Canadian ports.