From the outside, Britannic (1929) appeared fierce and modern. On the inside, however, the new White Star Line vessel looked like she was designed by someone’s great grandmother. (A great grandmother with appalling taste.) 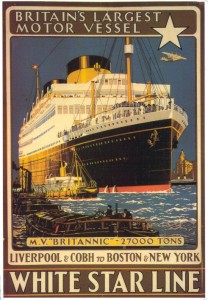 Arriving at the dawn of a new generation of sleek, Art Deco-inspired liners, like Bremen and Normandie,  Britannic’s interior was firmly rooted in the past. If Britannic had been launched in 1910 or perhaps even 1920, her stodgy styling would not have seemed so anachronistic. But for a liner designed during the Roaring Twenties—the Jazz Age—Britannic was a stylistic dud.

A quick look around Britannic shows that by the late 1920s, White Star was running on fumes, cutting corners on design and firmly mired in a past era when the company was still a transatlantic giant. Soon, Oceanliners Magazine will run an “Inside Ile de France” feature that shows how the French Line vessel, launched more than three years earlier, was light years ahead of Britannic in terms of design and style.

Take quick a look inside Britannic on the following pages to see why it was that Cunard Line absorbed White Star and not the other way around.