Can you imagine Queen Mary serving as a New York City high school? It seems that may have  been a viable alternative before the great liner was sold to Long Beach, California, where she resides today.

Anyway, as this 21 July 1967 newspaper story shows (click to enlarge), Queen Mary very nearly found a permanent home in Brooklyn, perhaps to compensate in a way for the Dodgers moving to Los Angeles a decade or so earlier.

Today, Queen Mary 2 docks in Brooklyn at the end of every westbound crossing. Who could have predicted that back in 1967?

Incidentally, one has to laugh at the use of the world “slums” in the headline. Could you imagine a newspaper doing this today without being forced to issue an apology? 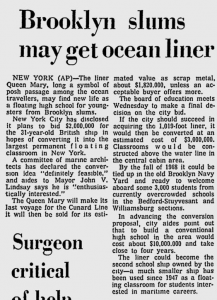